For some decades she travelled extensively for both the Foreign Ministry and the UN, but then she became ill and was retired on a full pension. “I was divorced and the children were grown up. Suddenly I had become a free woman with enough money. So then I began to write.” Her first novel was published when she was fifty. And a few years later, she accepted the invitation to Are Holen’s talk on Acem Meditation. Now she has been meditating for 40 years. “Life is totally changed,” she says – and thereby illustrates that one thing has not changed, that the urge to paint life in large and often dramatic brush strokes has not abated at all over the years. Fortunately, a wry smile is never far beneath the surface. Translated by Eirik Jensen 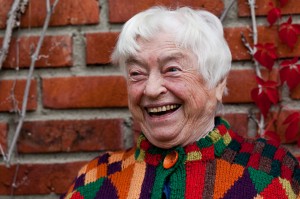