Deep diving into the self

Deep diving into the self

Everyday meditation has made her feel more grounded. A week-long retreat changed her ways of thinking. A communication course enabled her to feel more connected with herself and others.

Gill Scott on meditation and communication

“I had tried different kinds of group meditation, which I found relaxing, but I had a lot of resistance and on my own, I could barely sit still for ten minutes. Then a friend told me about Acem, and in September 2015 I went to an introductory course in Shoreditch in London. At the time, I was still grieving for my mother, whose death was a great loss for me. The course was a turning point. Afterward I felt lighter and more optimistic.”

Meditation: “Catching up with myself every day”

Since that weekend in Shoreditch, Gill Scott has practiced Acem Meditation every day for at least an hour, normally half an hour after waking and half an hour in the afternoon.

“Meditation has given me a regular way of anchoring myself. During the next two years, my job became more demanding and stressful, but very soon I began to feel that the technique was helping me to cope with that stress, and to prevent my insomnia from running out of control. Practicing Acem Meditation gave me an opportunity to catch up with myself every day.”

Gill worked at the University of Brighton as a history lecturer and assistant head of the School of Humanities. The interdisciplinary courses she taught led her into philosophy and cultural studies. She also qualified as a counselor, completing training based on psychodynamic principles. It was not simply feeling better that kept her with the meditation practice. She was also intellectually convinced.

“I took to it immediately. I was very impressed by the way Acem has synthesised the meditation practice with Western ideas about the unconscious, even linking it to neuroscience.”

Gill emphasises that for her, the value of meditation does not lie in bringing about a relaxed, blissful state every time she does it.

“Actually, I often find it very stressful. The sound disappears and I am bombarded by an inner voice saying, ‘you haven’t done this’, ‘why haven’t you done that’, as a multitude of unfinished tasks and projects run through my mind. But the extraordinary thing is that after spending half an hour doing that, my mind is much freer, so I get some respite the rest of the time. And sometimes meditation does bring pure relaxation. It is gradually helping me to feel more integrated and grounded in myself.”

Retreat: “A shift in my pattern of thinking”

In August 2017, Gill went to her first one-week meditation retreat at the Acem International Retreat Centre at Halvorsbøle in Norway.

“It was an intense experience. The long meditations took me into parts of myself that were way back in memory or that I hadn’t really visited before. In one of those longer meditations, I noticed a definite shift in my cognitive processes. I have always been prone to negative preoccupation and self-recrimination, looking back at lost opportunities, and thinking I should have done things differently. I have a successful career and lots of friends but in my meditation, I drifted into a focus on being single as a kind of failure. What did I do wrong? And then in the middle of one of those states, I was suddenly reminded of a conversation with a woman friend who told me she admired me for being single. Why? ‘Because the reason you’re single is that you’ve avoided certain sorts of compromise. A great many people in coupled relationships are compromising in some way.’ This conversation had taken place several months before, but now it popped into my mind, opening up a different perspective. I didn’t will it, I didn’t reach for it, it just came – and it felt like a big shift in my pattern of thinking,”

Gill says meditation has made her more open to experience and to appreciate the moment, whether it’s in nature, with other people or her daily routines. She counts herself as a fortunate person who, now retired from full-time employment, is able to make the most of what is available to her. In her experience, meditation is enhancing her ability to do just that.

She also thinks meditation is making her kinder and more tolerant. Although as she points out, “I don’t have to put that to the test very much”, she does feel less likely to reach for preconceived judgments about people, more accepting of complexity in others rather than rushing to categorise and pigeonhole them.

“What impressed me about the week at the retreat was that it’s like being invited into somebody’s home – being provided with every form of comfort and care, in a completely safe and secure place, where I didn’t need to worry about anything. I could go out into the beautiful landscape around Halvorsbøle, and at the same time have the safety and the support to delve into my inner landscapes in meditation. It just felt like a huge treat.” 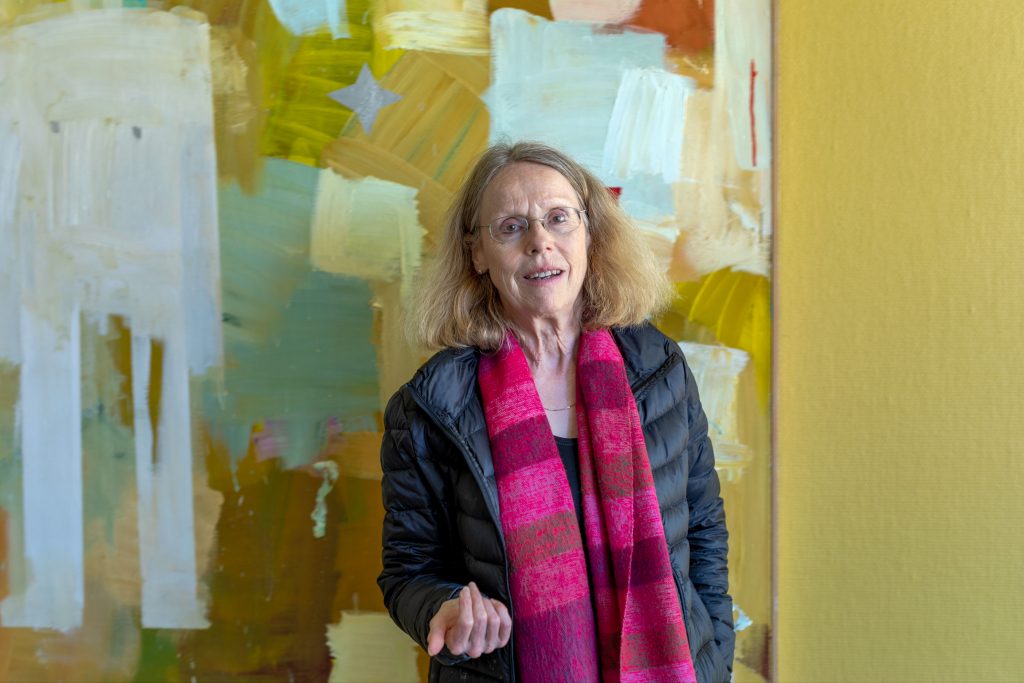 This year Gill tried out another type of Acem activity: the training in interpersonal communication, which takes place at Halvorsbøle every spring.

“I love the phrase ‘deep diving’ used to describe the communication groups. That is exactly what it is. It may sound risky, but the group I was in was remarkably warm and supportive. It was astonishing that so much trust could develop so fast, and that so many dark places could be delved into and brought into the open. I think it’s reparative and healing. The process was a kind of flow that moved along, with everyone in the group participating.”

The group leaders, she says, were highly competent. “They were just extraordinarily skilled at holding the process and steering it.”

The feedback in the communication groups is just one part of the training. “What is brilliant is the way the led groups were interwoven with the informal chat and the unled groups and the working together. This helped us to weave this thick layer of knowledge of one another. We also got feedback through the evaluation forms where you comment on yourself and the other group members. Looking at the scores together in the unled groups produced interesting discussions, where people could explain what their scores meant and why. It was fascinating and very reassuring.”

Even the various work tasks assigned to each group were integrated into the process. “On Monday morning, it was our turn to do breakfast. The group seemed like a well-oiled machine, with all of us working together and everyone looking out for everyone else. Absolutely no friction! This was important for moving us onto the track that made self-disclosure possible. Another day we were sweeping the drive. When you spend the entire morning in the led group just pouring things out, it’s great to go out and breathe in some fresh air and do some physical labour together. It was also good to know that we were making a real contribution to the household.”

Gill admits that she doesn’t know how she would have fared in a group with more conflicts. “Our group seemed to work very effectively as a supportive environment.  I think I personally would have found it difficult had there been a lot of conflict and tension.”

She describes her group as one with a high degree of compatibility and congruence and many common themes. “We were an older group, so we literally had more life experience than the younger groups. We could talk about topics like death and bereavement, failed relationships, and the experience of parenting. The group was such a rich source of shared material. But I also heard similar positive comments from other groups, with younger participants, and with more conflict than in ours.”

Gill becomes thoughtful when she considers the uniqueness of this course.

“There are probably places, say in Thailand or in California, where you could do similar kinds of things, but not with the same social and ethical commitments.  They would probably be more to make somebody a lot of money or frankly religious or both.  But there must be many people all over the world who would appreciate Acem’s approach and really benefit from it.  It is very special.”