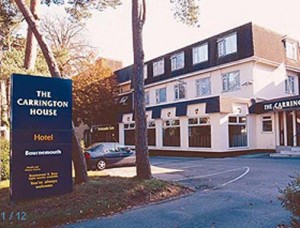 Just after Easter about 30 Acem meditators gathered in the Carrington House Hotel in Bournemouth for the annual UK weekend retreat. On a not particularly sunny Saturday afternoon, I had a space. A space for me to talk a little about Acem in the UK. Every year I have this space and every year I wonder what I will talk about. I wonder what I should talk about a lot, so it’s a natural past time of mine, this year I decided I would talk a little more personally about my fascination with the gentle awareness of the Free Mental Attitude and how I seek to continually find new ways of seeing it in my life and work. This blog is a rough summary of what I did with my space.

For me, like many people, Acem Meditation was a struggle to start. I am still not even convinced I don’t find it a struggle now, but at least I have experience, friends and knowledge on my side. When I started out I found it a wonderful experience but I just couldn’t keep going, I did however always love meeting other meditators in London. It has recently struck me that one of the selfish drivers for my involvement as an assistant instructor in Acem is that it helps my own practice. I used to have a strong sense of guilt about this, shouldn’t I be above such thoughts and committed to the noble cause of helping others and teaching the world to meditate?! And then it happened, I’d like to say I was sat under a tree when an apple of realisation fell on my head, but I wasn’t under a tree and no apple fell on my head but I did suddenly realise that it’s all about Free Mental Attitude. My acceptance of my own need, my “gets” from Acem which help my practice to be better are a bit like my repetition of my sound, I should do it when I can and my “gives” to Acem are working with whatever happens in the groups I lead, a bit like my spontaneous activity. If I find the right balance between my thoughts on the two I will have found something important about myself. This realisation sent my mind into a spin, what else is there, where else is my learning or training in Free Mental Attitude. 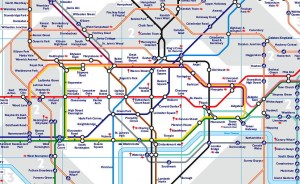 I was deep in thought one day travelling to Shoreditch and for those of you not from London, I use the Waterloo and City Line. Its a strange line. It has just two stations and runs from Waterloo to Bank in the heart of the city of london (Yes I don’t know why it isn’t called the Waterloo and Bank line – and its the light blue one in the bottom right hand corner). It arrose from crisis, two railway companies used to share lines into the city of London, but at some point it become clear this wasn’t working and the London and South Western railway built its own mini tube line from Waterloo to Bank to negate the need for working with another company. The problem with it is that Waterloo is the busiest station in London and thousands of commuters pack themselves into these tiny trains to get to work each day. However when I go to use the line its the evening and I’m travelling from Waterloo. I have the train to myself, no one is going into the city at 6pm. The only problem is that when I get to Bank station, there are thousands of people waiting to get on. I have to brace myself and concentrate and fight my way through the crowd to get out of the station. 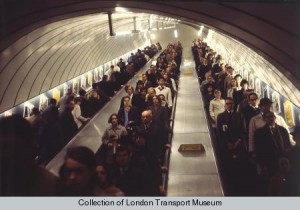 Sometimes it feels like I’m loosing the battle and getting swept back towards the train but with enough concentration, I can get out of the station. Concentration? CONCENTRATION?! The metaphorical apple dropped again, although this time neither tree nor apple had any chance as I was underground. But yes, I had to be incredibly concentrated on some days to escape. The more I thought about it, the more I realised that if I took a very Lax approach to my journey out of the station, an approach with no concentration I would simply get rolled back into the train or trampled on and I’d have allowed the spontaneously approaching crowds to control me. Now I thought, I’m onto something. Maybe the Waterloo and City line is an experiment in Free Mental Attitude, I realised I have choices in how I use the line, if I was too lax I would likely get swept along by the crowd, if I was too concentrated I would escape the station but maybe have to barge a few people out of the way in a horribly uncivilised way, but if I tried to find a balance between what was coming at me and my approach to it, I might find a way through and out of the station that was in someway a balance of my need to escape but done with awareness for the others around me. I had found a metaphor for Free Mental Attitude in my life, this helped me, it helped me to practice, it helped with my motivation and it helped with my teaching. But mostly it helps me to be me, to realise that I cannot control the people that come towards me, but I can control my attitude towards them and how much more rewarding is it to think like that. My slight obsession with mapping my practice to the world continues and I constantly look for examples of this balance between sound and activity, self and others, my time and friend time. play time and work time. Its for me the most fascinating learning in Acem is how my attitudes might actually be changing. So if you are ever in London, take a trip on the Waterloo and City line and have a little thought for the Free Mental Attitude.