Acem’s intensive activities in Spain are possible thanks to considerable local efforts and the local Acem center (Casa Acem) in Alicante. Acem Spain has two assistant instructors and five moderators. Below, one of the moderators from Alicante shares her thoughts about her new role.

“I have now been living almost 30 years in Spain, the last 20 of them in Alicante. (The Spanish name is a legacy of my ex-husband). As a nurse, I work with cancer patients in terminal phases, so I often have to confront heavy emotional burdens and stressful situations. 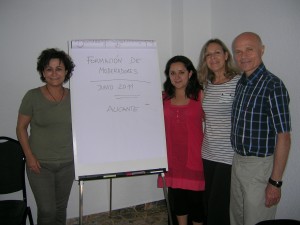 I was looking for a method that would enable me to cope effectively with the suffering that arises in such circumstances. I had been practicing yoga and tai chi for some time, but I needed something more to feel better. One day I met Jacqueline Robert, who is now an assistant instructor in Acem, and who was working as a doctor in the hospital where I was a nurse. She told me about this non-religious meditation technique developed by a Norwegian expert and researcher in stress psychiatry. This was exactly what I was looking for.

Moderator training
When I learned Acem Meditation four years ago, I could not imagine that three years later I would be a moderator and be contributing to Acem’s teaching activities. At the Deepening Retreat in 2010, I heard for the first time that moderator training would take place in different countries. I thought to myself, “how interesting”, but didn’t consider becoming a moderator until an instructor suggested that I give it a try. At the beginning, I was shy and a bit scared and had many doubts about my ability to moderate a group. However, the benefits that I had experienced through regular meditation and the importance of discussing what actually happens during meditation resolved my doubts. I decided to become a moderator.

I joined the first moderator training seminar along with Josefina Prieto and Elia Camacho at the beginning of December in Sabadell, a city close to Barcelona. After having led our first M1 follow-up course, we met for a second seminar during a weekend in the Acem center in Alicante in the middle of June 2011.

Elia’s experiences
A few days ago, I asked Elia about her motivation for becoming a moderator. She answered: “On the one hand, to return what I have received, and on the other hand to dive deeper into the theory and to have closer contact with other meditators. And, because it is also an opportunity to grow, to get a better understanding of group dynamics, to delve into the psychology of meditation and to listen to the experiences of others.”

About her experience as a moderator so far, she told me: “It’s very rewarding, although, at first, I can’t deny, I was a bit afraid of introducing myself to the group, knowing that there were participants who had spent more time meditating than I had. But as the meeting progressed and I became more relaxed, I realized how amazing it is to exchange experiences, and that most of the troubles and fears I might have are a reflection of my own insecurities and not those of the others.”

Growing family
Fortunately, the family of moderators in Spain is growing. In Madrid, María Jesús Tardón and José de la Fuente have recently completed their moderator training. José had tried yoga and Buddhist meditation, but he didn’t like it. Just like Maria, he found Acem Meditation through the Internet. He says: ”It marked a before and after in my life. I’m more focused. It has transformed my way of seeing things, and taught me to empathize with others. Although some meditations can be uncomfortable, this is part of a process in which I resolve issues that will improve my life in the long run.” He is excited to be a moderator.

Alicante and Madrid have an average of two M1 and one M2 follow-up courses a year; in Barcelona, there are twice as many. There is an increasing interest in learning Acem Meditation. My experience as a moderator up to now consists of having completed one M1 group and one M2 group.

Regardless of our differing reasons for joining Acem, we share a common motivation for being moderators, as well as a sense of responsibility and commitment. In short, I’m very happy to be a part of the Spanish Acem team.”