The faultfinder isn’t allowed to decide everything

The faultfinder isn’t allowed to decide everything

She doesn’t want to listen to the critical voice inside her. But when she asks the faultfinder in her to have a break, he stands up, three meters tall, and looks at her.

This is really so important to her. However, in hindsight, she thinks: «what if I was wrong? What if I only believed that I understood it, and clung to the understanding – in the flow of everything that whirred and waved in my mind during meditation»?

She tightens up at the keyboard. It is like entering a party that is supposed to be simple and nice, and then it feels like something is hardening in her stomach, and her mouth becomes afraid of formulating words.

She sits and waits for pearls to scatter over her. Pearls of understanding. Sparkling phrases. She types letter by letter, and as soon as she watches the screen, she slumps. They are only stupid droplets from the swamp within her. Stupid. Useless.

There is sobbing in her. Something small and scared has curled up inside.

Don’t be so preoccupied with doing it right

She has been here before. In this lonely darkness, In this sobbing. And once, in a retreat, she heard some words about how to repeat the meditation sound: thinking the sound in a gentle way is also an exercise in not being so preoccupied with doing it right, but rather try as effortlessly as one can.

It felt like these words changed something, which escaped from the impossible and entered the possible in her.

She was preoccupied with getting it right whatever she tried. It had to be done the right way. Inside her, there was a busy and vigilant authority who saw to it that everything was performed the right way, according to the template, and at the slightest sign that she wouldn’t manage the right way, she started fighting to make it right anyway.

Then she wanted to get out of the meditation. Away from all this. Otherwise, she might end up in the lonely, dark corner, ashamed of herself.

Yet, repeatedly, she ended up in that corner or other difficult places in the meditation; it felt like she had entered a very narrow passage between massive walls. It was difficult to repeat the sound there, yes, it was as if the walls stood pushed towards the sound, which was actually stuck between them.

She understood that the meditation practice mattered most when the watchful side of her let go of its firm grasp for a little while. It was as if she for a long time had struggled to keep the façade, even in her inner rooms. But now it resembled a kind of play. It wasn’t dangerous to stumble. Stumbling was part of trying. She could try again and again. She started struggling immediately. Yet, she had to manage it; that was the only thing that mattered. She felt certain about that. She must succeed in thinking the sound properly, otherwise, it would be horrible to be her.

In the guidance afterwards, the guide asked if she could see any other way to be in this than to struggle.

«What is so dangerous about not getting it right?» one participant in the group asked.

«It is so difficult. So terribly shameful not to succeed in repeating the sound, but I do my best. Struggling on.» «One must either fight or give up?» «Yes, perhaps..» «Thinking the meditation sound gently is also an exercise in not being preoccupied with achievement, and rather try as effortlessly as possible».

Something was opened ajar in her thoughts. Might she try to accept that it was messy and bad at times. Just thinking the sound without struggling towards a specific result. Without using effort. What mattered was apparently not the result, but that she kept trying. It was the trying that mattered.

She wanted to be less preoccupied with achieving something. Someone even said that it was impossible to think the sound perfectly. The best she could do was to try and think the sound as gently as possible for her.

It was good to hear that nobody could do it perfectly. It helped her to let go of the thought about perfection. She understood that what mattered was the trying itself. The vigilant corner in her mind loosened its firm grasp. While she had, for a long time, acted and struggled to keep her façade, even inwardly, it now seemed a bit more like playing. It wasn’t dangerous to stumble. It was part of the trying. She was free to try – again and again.

When she found herself in the dark, lonely corner, or felt stuck in a narrow passage, it didn’t mean that she was in the wrong place. It was a part of her where she would now be present, rather than fighting against or fleeing. Try to think the sound even there, without using effort. Oh, it was a difficult place to think the sound. At times it became impossible to think any sound there. At other times, it became like a tiny whining.

With sound and fun in a free way

The watchful part of her got up from the chair several times, ready for fighting. But there was also another part of her that didn’t have to tidy up and sort out or have full control. She could let it be difficult, and still go on with her little task: try to think the sound gently.

She could also at times join the others and the party, and it was ok even if she wasn’t very cheerful. She didn’t have to make up for it by raising her voice, or pull herself together and push forward a smile; she could accept that it was sufficient to be present and offer the words she had.

She didn’t have to be cheerful or elated in order to give herself access to the others. She could be in the trying out.

The three-meter high faultfinder might stand there, but he wasn’t allowed to decide everything. 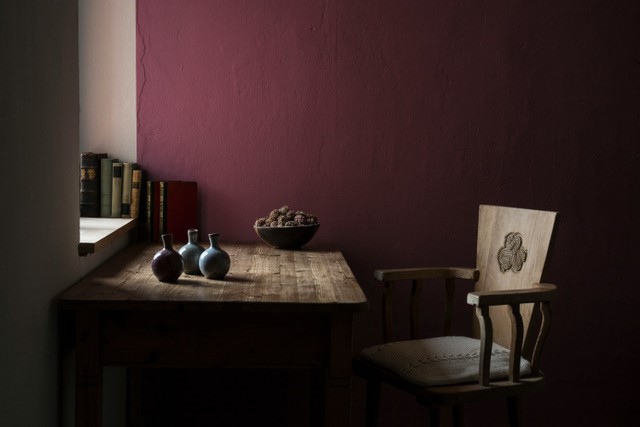 A room is open.

I walked in there when things were difficult.

I walked in there when things were easy.

No cleaning or refurbishing was necessary.

All I did there was to repeat the meditation sound as gently as I could.

And so it became a room, a place that is always waiting for me, ready to let me in.