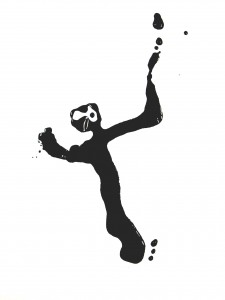 Freud and others have taught us to see many of our psychological and emotional hang-ups as effects of childhood traumas or other past experiences. Meditation guidance in Acem also sometimes brings in associations to present or past issues that seem to be connected to our problems. Metaphorically speaking, the ghost lies within ourselves.

Alien force
In some cultures, though, the ghost inside is not a metaphor, but something that is firmly believed in. In contrast to much of Western society, these cultures never let modernity wipe away the belief in spiritual beings that may possess us and do us harm. When a person reacts completely out of character, or is overwhelmed by uncontrollable and incomprehensible emotions, or somehow loses touch, this is typically seen as the effect of some intrusive alien force. What is needed is not therapy or guidance, but exorcism.

Past lives
A slightly different case is the common new age view of our various hang-ups being the effects not of past experiences in this life, but of earlier incarnations. In such cases, there may not be a ghost or a spiritual being, but the key to our problems is seen as lying in semi-hypnotic fantasy travels to previous lives (in which most of us for some reason seemed to be kings or queens) rather than memories from our present life-time.

Alienating
For all I know, ghosts may very well exist, and reincarnation may be a reality (though the opposite may also be true). As an approach to human conundrums, however, bringing in such external forces may also be alienating and take away some of our motivation for exploring the various lines running through our lives, reducing rather than increasing our sense of responsibility and ownership.

Person in charge
Not that a purely psychological approach necessarily solves the problem. Looking at events and experiences that led to emotional bondage may be useful, but if the focus on our misfortunes becomes too strong, we easily end up in the position of a helpless victim rather than a person in charge. Reflecting on situations where we have failed in relation to others may be more important than cases where others have failed in relation to us. Guilt is not always an irrational feeling. As a good friend told me: “St. Peter is going to be less concerned with what others did to you than with what you did (or failed to do) to others.” Metaphorically speaking, of course.