I don’t know what was the original motivation behind the “bone church” in Sedlec in Kutná Hora in the Czech Republic. Its present use of human bones and skulls for extensive ornamentation of a church is the product of the Czech wood-carver František Rint, who even used human bones to sign his work in 1870 on one of the church walls. As many as 40,000 of the former inhabitants of its graveyard were put to good use here, and some of the “artwork” include all the bones of the human body. Although such decorative uses of death may sound more macabre than meditative, being literally face to face with so many human skulls (and bones) does have the potential to awaken serious contemplation. 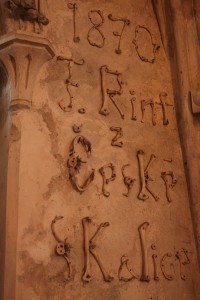 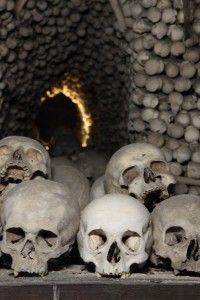 The problem is the present-day context. Though a few among its hordes of visitors do throw in a coin or two as a kind of ritual offering here and there, it is quite clear that this place is no longer primarily a place for worship, prayer, meditation or any other serious existential reflection, but first and foremost a tourist spot, which attracts large crowds from different parts of the world, who look at the bones with a mixture of laughter and horror, as they pick up their cameras and shoot a larger number of bone and skull pics than they will ever be able to do in any other location (as I did myself last week when I visited). 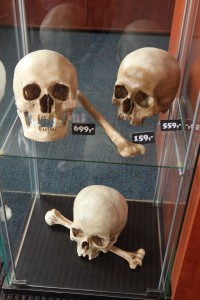 The intro to the audio-guide says it all: “Dear visitors. You have just arrived at the most frequently visited historical monument in Central Bohemia, and one of the most popular in the Czech Republic and Central Europe.” There follow references to the nearby convent – now turned into a tobacco factory – and the Unesco World Cultural Heritage status of the church. We get all the way to the very last part of the audio-guide (when you can turn it off without further loss) before we are told about the religious meaning of such an “ossuary” (a final resting place of human skeletal remains, according to Wikipedia). 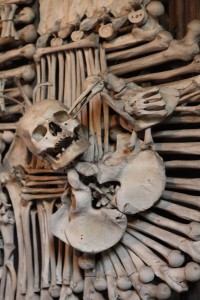 Thematic meditations on death are widespread in different cultures, whether as the “memento mori” of early Christians (or their Greek predecessors) or the early Buddhist contemplation of rotting bodies at charnel grounds. When effective, such meditations may produce in the meditator a sense of existential urgency, as well as a kind of calm (though perhaps sorrowful) clarity and a wider perspective on life.

But death may also produce a fascination that is more exciting, tantalizing and, well, macabre than genuinely reflective or meditative.

Not that the bone church of Sedlec isn’t tastefully done. 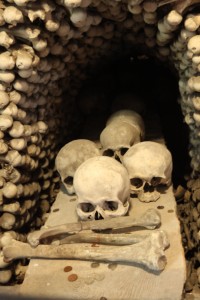 As in so many other religious monuments in the Czech Republic, the influx of tourists does not take much away from the cultural and aesthetic experience of the church. The Czechs are masters in providing for tourists in culturally and historically sensitive and sensible ways. But in other countries there is often a perceived friction between the original uses of holy places and the ugly commercialisation of tourism: tourists are kept out of some sections and are not allowed to take photos, there are rules for proper clothing etc. In the basement of the Chiesa di Santa Maria della Concezione in Rome, where monks had used bones and skulls of 4000 dead monks 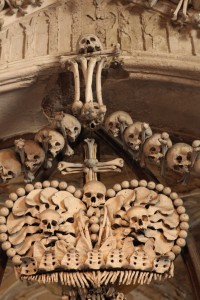 as wall decorations, there was a different sense of piety, including an absolute prohibition against photography – irritating, perhaps, for the eager tourist, but closer to the original intention of the place.

In the Czech Republic there seems to be little such friction. This is partly because Czechs are able to practise commercial tourism and still avoid some of its ugliness. But it is even more because whatever “original” use there may have been is no longer there.

Least religious people of the world

Several sociological studies have found the Czechs to be among the least religious people of the world (though in competition with China, Japan and a few other countries). This is attributed partly to its long period of Communist atheism, partly to the patriotic resistance against the dominance of the “foreign” Catholic Church after Czechoslovakia became independent in 1918. Whatever the reasons, it is thought-provoking to see this combination of cultural sensitivity and religious and meditative indifference.